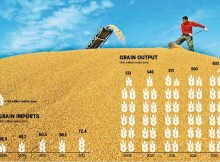 In this invited Commentary, Wandile Sihlobo & Tinashe Kapuya point out that global commodity markets were beset by fears of a major economic slowdown in the Chinese economy, following a 30% loss of value in the Chinese Composite Index as well as disappointing annual GDP growth figures which projected less than the expected 7%. China, being the second largest economy in the world, is an important player in the global market, and an economic slowdown would inevitably translate to declining demand for grain and oilseed commodities. Sihlobo & Kapuya go on to explore the Chinese grain and oilseed trade structure, in an effort to present its significance in the global grain and oilseed markets, which in turn, also influences the South African domestic markets.